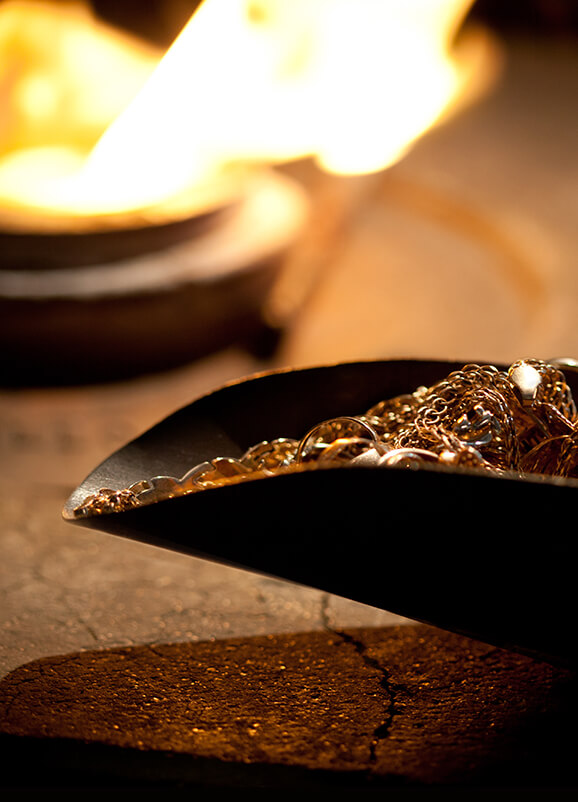 Engagement Rings
The Truth About Recycled Gold
If you are a regular reader of our blog, you might have an idea of what's coming next. Even if you don't know the precise topic, you know that it will be an in-depth exposé of the diamond industry that will reveal another ugly and deeply buried dirty secret that they have successfully, until now, that is, deployed to profit off the back of unwary customers. Well, we won't disappoint because this article will do exactly that.
You might have seen the slogan "We use recycled gold" or a variation of that proudly plastered in advertisements, billboards and brochures by the giants of the jewellery world. This is a blatant attempt at pandering to the eco-conscious and modern demographic by claiming to help the earth by only using recycled gold for their rings. Not mentioning their hypocrisy in claiming to help the planet while openly selling mined diamonds which destroy our environment and by default, some are Blood Diamonds, the 'recycled gold' campaign is nothing more than another clever marketing sham concocted by the established jewellery industry in their attempt at staying relevant.
So, let's start at the beginning. The 'recycled gold' marketing campaign originated during the 80s but, over the successive decades, fizzled out. If it stayed that way, we wouldn't have been forced to article in an attempt to bring it to light. Unfortunately, the campaign has seen a massive resurgence, backed by the established players in the jewellery industry. Not only are the purported benefits of using 'recycled gold' simply not true, but it is actively harming consumers' trust and choice.

Nothing good has ever come from wearing recycled gold since the sources of those gold are unhappy events. The only time people willingly sell their gold is when their partners have passed away or through a divorce. Even sadder, when people become so down on their luck that their only hope to back on their feet is by selling their precious jewellery. That is without mentioning the lucrative secondhand market that pays a very low price to desperate customers. A lot of the time it is not known if those selling their gold are the true owners. The gold then gets quickly melted and on-sold as 'clean recycled gold'. There are few circumstances where recycled gold has not seeped in unhappiness and suffering. There is also the widely accepted belief that rings made from recycled gold carry 'bad karma' that gets passed on to the new owner.

NOVITA DIAMONDS does not believe in using recycled gold for our rings and jewellery. We don't want our customers to carry the burden of used gold. We are a firm believer that engagements and weddings are joyous occasions and causes for celebration. They are the start of a new journey, a new phase of life, and thus, they should only be accompanied by the purity of new gold and without any of the burden of recycled gold. After all, an engagement or a wedding is something that happens only once.

The myth about mining and recycled gold

One of the loudest rallying points for the 'Recycled Gold' movement is that it eliminates the need for newly mined and minted gold and thus drastically reducing pollution and environmental damage. We, of course, contest this claim since it is just another marketing trick. To demonstrate our point, we will use math and numbers, and you can see for yourself and decide if our refusal to accept the claim has merit. Let's start by finding out how much gold is consumed to create all the engagement and wedding rings the world uses in one year. Currently, 3,000 tonnes of pure gold is collectively mined all around the world in a year. 1 tonne of pure gold results in 1.33 tones of 18k gold (0.33 tones consist of other alloys). An average ring has 4g of 18k gold, so with 1.33 tonnes of 18k, we can produce 332,500 rings.

In summary, 1 tonne of pure gold is enough to produce 332,500 rings. To find out how much pure gold is used in a year to make rings, we have to determine how many marriages occur in the same period. In America, the largest consumer market in the world, an average of 260,000 marriages takes place. Although we don't have concrete figures, most experts estimate that 3.5 million marriages occur globally. Using simple maths, we can calculate that to produce 3.5 million engagement rings for everyone around the world for a year will take 10.5 tonnes of pure gold. That represents 0.35 % of the global gold output, which is such an insignificant amount it's almost ridiculous. It's almost a rounding error. So how much are the companies and chains claiming they use "Recycled Gold' actually contributing to the reduction in mining? Less than half a per cent!

Thank you for requesting an appointment at Novita Diamonds.

Your request has been noted and you will be contacted shortly by one of our friendly staff to finalise your appointment.