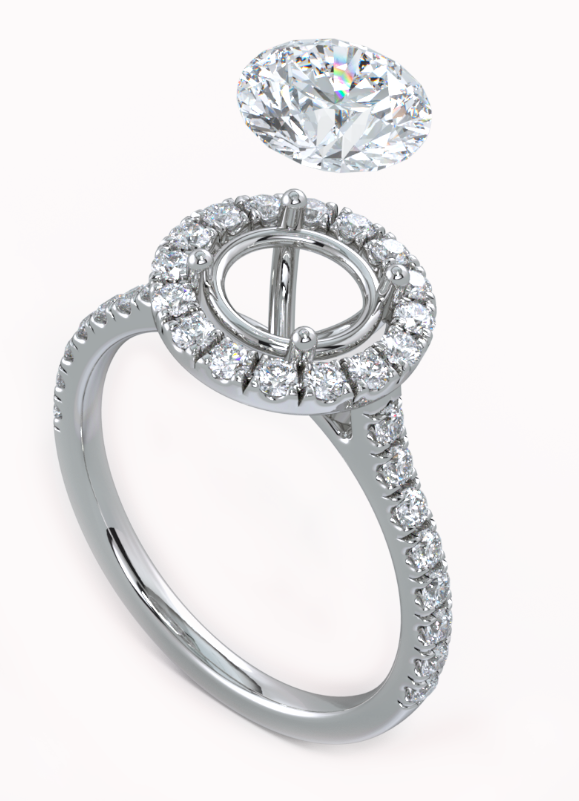 Diamonds
Why Diamonds are the #1 choice for Engagement Rings
Diamonds have become the #1 choice for engagement rings since the early 1900s when British company De Beers introduced diamonds to the world through one of their major marketing campaigns.
We're all familiar with a famous slogan "Diamonds are forever", which is one of the many that De Beers has been using throughout the decades of well-targeted marketing. Yet it was not just the marketing alone that did the job as a diamond is indeed the best stone we know. In this post, we'll cover all the major alternatives for diamonds known in the present times.

Diamond is the strongest natural material known to humans which explains the saying "Diamonds are forever". These precious stones are superior in all aspects such as hardness, sparkle, brilliance, etc. But don't worry, we'll keep this brief and share why the other stones are not good options.
Tip: Even though diamond is the strongest material in the world, it must be treated with care. If you knock your ring a bit too hard, you could damage the girdle of your diamond or worse - lose the diamond at all since the safety mechanism of the setting could get battered as well.

Moissanites are not as hard as diamonds. In fact, diamonds are 4 times harder than moissanites.
These stones are not white. Most moissanites are low in colour on average when compared to a diamond colour grading. Most moissanites have a brown tint which really catches the eye in dim light as this tint makes them look dark.
Moissanites' sparkles are iridescent in colour. Diamonds' sparkles are white. Those rainbow-like sparkles do hit the eye and evoke the impression of costume jewellery.
Moissanites have double refraction. This means that when one looks at a moissanite from the top, they will see where the facets join. Thus, instead of seeing just one line - the join, there are two - two joins.

Why not White Sapphires?

White Sapphires do not sparkle as much as diamonds. A lack of the light-reflecting ability deprives sapphires of sparkling as much as diamonds which is another significant difference between the former and the latter noticeable to the naked eye.
White sapphires lack endurance. While exceeding other stones a sapphire is still a poor choice for an engagement ring centre stone as it can get chipped over time. Diamonds are 10 times harder than sapphires.

Tip: White sapphire is the best choice for the glass in all expensive watches due to its clarity and scratch resistance.

Why not Cubic Zirconia?

Cubic Zirconia has porosity. The stone will look great for roughly 10 - 30 uses after which the shininess is gone. This happens due to contact with hand creams and dirt that penetrate the pores of the stone making them dull.

Cubic Zirconia scratch and chip easily. The top of the stone is fragile so it is prone to scratches becoming dull and not being able to bring long-term joy to its owner.

Tip: Cubic Zirconia can look similar to diamonds at the beginning but they don´t last long which makes it not ideal for everyday wear.

Tip: Watch out for companies that use fancy marketing terms like "diamond simulants" or similar. It's just a fancy wrapping to a disappointing stuffing.

To summarise - stick to diamonds as they tick all the boxes having no downside. Except for the price of course. To tick this box we offer lab grown diamonds with which you can spoil your loved one with a gift that lasts forever.